I woke up from a dream I had early this morning. It was so real and troubling. We were sitting in a shop in a small city looking at the passersby when suddenly the sky became hazy as if it started to snow.

I woke up from a dream I had early this morning. It was so real and troubling. We were sitting in a shop in a small city looking at the passersby when suddenly the sky became hazy as if it started to snow. Bits of something looking like snowflakes start coming down in a swirling motion like a whirlwind. As the white things descended, they became thicker and thicker. People gathered around, looking at what was happening.

I beckoned to my wife that something strange was happening; she was busy doing something in the shop that seemed like our home. Then, as the white snowflakes got thicker, they turned into white sheets and fell to the ground; the sheets were just big enough to cover a person. Some people took the sheets and covered their bodies, while others looked in astonishment and did nothing.

I picked up one of the white sheets but did not cover myself because I was unsure what would happen. The thought came to me that, “this is just like when Jesus is coming and sends us a robe of white sheets!” But at least I got a sheet just in case if I needed it. I also got one for my wife, who was still busy with something. About five others picked up white sheets, but they did not cover their bodies like the others.

Suddenly, a sharp, loud noise lasted for a second, and those covered with the white sheets started to ascend at a 45-degree angle into the sky as if they were taking off like a flying carpet.

As the group arose, the white sheets faded with the bright white sky because the falling white snowflakes filled the whole sky. I called my wife suddenly and quickly explained what was happening; then I gave her a white sheet, and we covered ourselves hoping to ascend with the others. The other five people who did not cover their bodies at first also put on their sheets. We then began to ascend above the cars, but it was very slow. We only went as high as the top of the trees but meandered slowly over to a big building that looked like a courthouse.

There were no more sheets on the ground by this time because they disappeared, and the sky cleared. The seven of us hovering above the trees descended slowly to this larger five-story building; we went inside. I turned around to look at what the people were doing; they ran around looking for sheets. I still had my sheet around my body.

When I turned to enter the building, I did not see where the other six went. As I went down the passageway, I looked in a few rooms for them, but they were not there. Eventually, I came into what seemed like a church hall. There were about three guys dressed in suits and ties who beckoned to me to come over. One said as they laughed, “You come to be baptized?” I said yes, and they laughed louder. I wonder if they were for real, but then they were serious and began the baptism ceremony. One of the

m led me over to a small pool and said, “So you come to be baptized?” And he laughed. I wondered if I was doing the right thing because they looked as if they were taunting me. As two of them held me and put my head down into the water, I did not feel the water, but I could see their faces as they grinned. Then, one of them shouted to the others, “He is not properly baptized; shove him under the water again!” So they pulled me up and shoved me under the water again, but I still did not feel the water. They were laughing so loud when they pulled me up, so I knew they were not for real.

I left them and went in search of the others still clinging to my white sheet. The people were frantic as they ran around, asking how they could get a sheet. I searched but could not find the others. At a distance, I could see other people I knew: they were friends and family members who did not have a white sheet. As I searched for the others, I asked myself why I hesitated to cover my body the first time before that loud noise. From the many Bible studies that I attended and even taught myself, I knew that the event looked like the second coming of Jesus Christ.

Why did we ascend but only get to the top of the trees but then come down by the courthouse? I knew what to do from the many Bible studies I had, but I hesitated. What should I do now? As I walked around looking at the confused people, I did not know the answer; I did not know where to go. I kept wondering, looking at the others who were still running around trying to find a way to get a white sheet. Again, I did not know what to do next or where to go. The slight hesitation of what I did was st 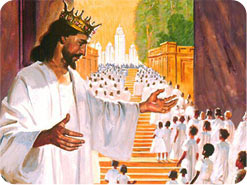 ill on my mind. I then woke up and realized that it was only a dream. I looked at the clock; it was 6:30 A.M. I got dressed and, as usual, went to church, still thinking about the dream.