3-The Great Debate: God Does or Does Not Exist? 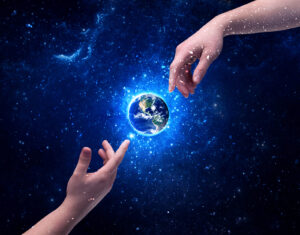 Let’s put away the evidence; let’s use something else. What is that? Let’s use what we have and can use: our thoughts, brain, and mind – that is, intelligence. We know that we exist because we communicate, and you know that. With that first premise, we can conclude that we have understandings and can reason objectively. This intelligence is what we must use to answer the question: God Does or Does Not Exist?

With our intelligence, we will add the power of deduction – that is, to come to a conclusion based upon the process of elimination or separation. That is also the action of grouping things. The first grouping is inferior verse superior. For example, we can deduce (by our personal preference – which differs from person to person, cultures, and locations) that a 1-gigabyte computer processing speed is superior to a 16k computer. With this type of grouping, we can use a similar deduction to proceed to answer the question.

If we humans can think, create, communicate, then we must be intelligent. If we can make a 20 stories building from stones, iron, and other material that a lion cannot, we are superior to lions. However, if we cannot make DNA, or give life to a dead person, something is superior to us humans. We know DNA exists; also, we know life exists, but we cannot manage them or bring them into existence whenever we desire; therefore, someone who made these things appear before us (existence) has superior quality.

Now, if you look at the ability of the human: we talk, laugh, cry, eat, sleep, entertain, work, etc., etc. We display these characteristics, but we are inferior to something that made DNA exist before our eyes. Let’s say the superior group that makes the DNA coding is called “G”; then “G” exists or existed before and has made DNA with all its complexities. If we humans can make a house, destroy it, and build another one, then we can say that we can make a house exists or not. If “G” can make DNA or life (just like humans can do with a place), then “G” can make life exist or not.

Let’s look at some of the things “G” made that humans did not: atoms, gases (oxygen, etc.). These “G” made mud, trees, flesh, wind, light, and living things with complex DNA coding. Humans did not make these. Therefore, “G” is superior, and “G” exists. The great debate is to prove if “G” exists. From our intelligent deduction, “G” certainly exists. We could have named “G,” “B,” or “D,” or even “God.” We humans have the intelligence to do that, so if “G” is called “God,” then God exists and is superior to humans. This deduction is the answer to this debate.