75-Humans Who Threaten Others are Normally Evil

Blog Home Posted by Carlton Foster on May 09, 2020 in category: Bible Messages

Humans Who Threaten Others are Normally Evil

I was watching a documentary on TV about a movie where the New World Order is being acted out – showing how the future will be with the implementation of the New World Order. I noticed that the authorities and the elites use threats to accomplish their objectives. Then it dawns on me that evil people are the ones who hurl threats at others. I tried to think if there was ever a time when Godly men of the Bible ever threatened others? I searched the Bible (with different translations), and I never saw godly people threatening others; therefore, I realized that only evil people threaten others.

Jesus said in Matthew 10:26, “But don’t be afraid of those who threaten you. For the time is coming when everything that is covered will be revealed, and all that is secret will be made known to all.” Evil people usurp the control over others by using something precious to threaten you (your life, your children’s lives, wealth, positions, etc.). They attempt to drive fear into you; fear is evil that evil people use as a means of power. God said in Revelation 21:8, “But cowards, unbelievers, the corrupt, murderers, the immoral, those who practice witchcraft, idol worshipers, and all liars—their fate is in the fiery lake of burning sulfur.” It is a sin to be afraid – to be a coward from the threats of evil people.

This process is how you can distinguish good people from bad people and identify the evil ones from the godly ones: if a person threatens others, they are evil. Even so-called Christians who threaten others are wrong. For example, in Acts 4:21, the Jewish council threatened Jesus’ disciples about what would happen to them if they continued to preach about Jesus. Even the Catholic Church in the medieval days threatened many people and burnt and killed many at the stake. Therefore, any illegitimate human who threatens others is an evil person.

So what about a parent who threatens their child who is disobedient? Also, what about the various passages in the Bible translation that shows God also threatens rebellious people? Humans learn the skills, techniques, and leverage we can get when we see others threatening others and how cowardly people comply because of the threats. We realize that we can easily have power over others when we threaten them. God is our creator, and His statements are factual; some people call them a threat. For example, God said to Adam, “The day that you eat of the tree of good and evil you shall die” was a factual statement, not a threat. It is like saying, “the day that you drink that poison, you shall die.”

Let’s look at the following passages:

Some Bible translations used the word “evil” in place on the word “threaten.” God is our creator; he owns us. He said he is sovereign – self-governing, and therefore can decide how he wants to handle his disobedient people. Likewise, parents give birth to their children, so they also own us. But the governments, rulers, and influential people don’t own us, so they don’t have the authority to threaten us. They seized this authority over us because they bought us (with salaries or wages), we signed contracts (birth certificates), and said we gave over our lives to them (either voluntarily or forcefully); therefore, they owned us. So they think they can threaten us. Satan also makes a similar claim when Adam and Eve fall to his sinful lies and trickery. 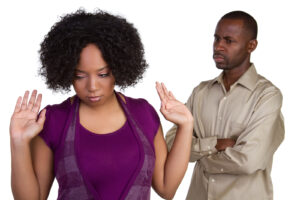 Our parents and God are our legitimate owners. They have our interest at heart; all others are illegitimate, and therefore any threat (or evil) coming from the illegitimate owners are only evils. These claims of ownership, they believe, give them the power to threaten others, but apart from God and our parents, any threats from others are a means to identify who is actually the evil one.