69-We Do Wrestle Against Flesh and Blood

We Do Wrestle Against Flesh and Blood

I have heard this Bible verse (Ephesian 6:12) being quoted many times, and it is usually done when some unexplainable maladies are afflicting a Christian. To put the puzzling situation into context and to offer some explanation, Ephesian 6:12 is the explanation, “For we wrestle not against flesh and blood, but against principalities, against powers, against the rulers of the darkness of this world, against spiritual wickedness in high places.” While this is true, we failed to realize that we are also actively involved in the wrestling! The ‘fights’ include all those spirits and humans who facilitated the disorders, as well as those spirits and humans who are affected by them. 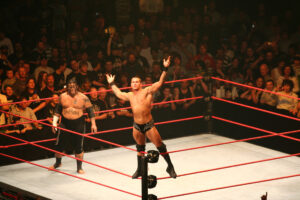 The “fights” go wide and far: as wide as the principalities, powers, and rulers of the darkness of this world, as well as the spiritual wickedness in high places, but as narrow as the fights between you and me, between thoughts of my mind and body. This fight goes very far and wide as the victims’ relatives, families, associates, and angels of God (those who are also wrestling on behalf of the victims). The ‘fight’ also goes so near as the fights with my body’s mouth, hands, and eyes. Ultimately though, the primary “fight” is between Satan and Jesus over humans’ souls, and therefore we are involved in that fight.

The “fight” started in heaven, “Thine heart was lifted up because of thy beauty, thou hast corrupted thy wisdom by reason of thy brightness: I will cast thee to the ground, I will lay thee before kings, that they may behold thee (Ezekiel 28:17 KJV).” God said this to Lucifer, and in Revelation 12:9; the Bible recorded this event, “And the great dragon was cast out, that old serpent, called the Devil, and Satan, which deceiveth the whole world: he was cast out into the earth, and his angels were cast out with him,” and verse 12 continues and said, “Woe to the inhabitants of the earth and the sea! For the devil has come down to you, having great wrath, because he knows that he has a short time.”

The “fight” came down to earth, and we are affected physically and spiritually. So Paul wrote a letter to the Ephesians who were experiencing the effects of the disorders of the “fight”; he wanted to comfort them and let them know that this “fight” goes wider than they might perceive; the “fight” does not stop with us humans. He told them, “Be strong in the Lord and in the power of His might. Put on the whole armor of God that you may be able to stand against the wiles of the devil, for we do not wrestle against flesh and blood, but against principalities, against powers, against the rulers of the darkness of this age, against spiritual hosts of wickedness in the heavenly places. Therefore take up the whole armor of God that you may be able to withstand in the evil day, and having done all, to stand (Ephesian 6:10-13).” Paul wants to dispel the notions many religious people have, that these disorders result from some sin the person has committed. For example, in John 9:1, Jesus’ disciples saw a man who was blind from birth, they asked Him, “Rabbi, who sinned, this man or his parents, that he was born blind?” People do believe that all maladies are a result of their sin. They forgot that humans are involved in the fight that started in heaven, and as such, we often are afflicted by it.

When Paul said we are not fighting against people made of flesh and blood, he is reminding us that the fight started in heaven. We are not the instigators of this fight; we are only caught in the middle. Satan and his demons came to earth because they were expelled from heaven. He reminded them that the battle is against persons without bodies—the evil rulers of the unseen world, those mighty satanic beings, and great evil princes of darkness who rule this world; the fight is against vast numbers of wicked spirits in the spirit world. Yes! We are involved! And so when God’s people experienced disorders, remember that Jesus and Satan are wrestling for you and me and that we will experience difficulties because of it. The wrestling is for the souls of human.