63-Why Do People Argue So Much?

I am fearful of wild animals and even ferocious dogs. My adrenaline exploded even when I imagined their attacks. Even with humans, I experienced the same feelings when they verbally attacked me. Why? People argue because they are exercising their normal tendencies to be punitive. We are quick to inflict or punish a person that you in your mind realized or perceived that somebody did or said something wrong. As the judge and jury, you need to inflict the just punishment or reprimand for the wrongs that the person had done. In your eyes, you have to set the wrongs, right. 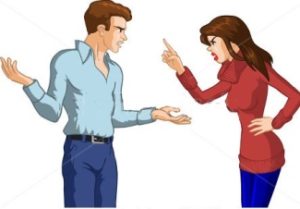 On the other hand, the accused persons feel as if they are being attacked, and naturally, they put up their defense mechanism. Their reactions kicked in, and the accused persons lashed out and argued their point of view to show you that they were not wrong. They think that you are the one that is wrong in thinking that they were in the error of saying or doing whatever you had accused them of; so the arguments started, and the deliberation of the back-and-forth justifications and condemnations, the judgments pronounced.

All these techniques of applying punishment that we have studied and practiced are being implemented during an argument. So the question is, why do we argue so much? I recently saw a person requesting prayer, asking God for help to stop, eliminate, or reduce the arguments between her and her husband. She is praying and asking us to intercede with God for help in that situation. We all need assistance in these matters; however, we are not aware we are causing the issue; we initiate the arguments, fuel the contentions, contribute to the debates, and then pray to ask God to eliminate or reduce the disputes.

The answer to the prayer request starts with you! First, cease being an arbitrator or judge on something you perceived as wrong and is not factual. Instead of being punitive in your demeanor or actions or words, why not embrace love or do a praise report. If you don’t have the facts, remove the judgments. Why not do something that the other person will appreciate by showing how kind, good, and loving the other person is? When you perceive (and you could be wrong) that the accused has done or said something wrong, they will lash out and argue their point. You will get what you propagate.

The Bible says that you reap what you sow! Are you reaping contentions and arguments? Then stop planting those things.