60-Why Do Some People Fail?

Why Do Some People Fail?

When and how did some of us fail with this new birth, this newness of life? Why do some people fail in their Christian experience? We no longer do active work for God, and we don’t actively witness to others for the sole purpose of winning them to Christ!

The sky was still dark when the old patriarch heard God speak. “Abraham, … take now thy son, thine only son Isaac, whom thou lovest, and get thee into the land of Moriah; and offer him there for a burnt offering upon one of the mountains which I will tell thee of (Genesis 22:1, 2).”  Abraham began to tremble when he considered the staggering consequences of this command. God had promised that through Isaac, he would father a mighty nation. All of Abraham’s hopes and dreams were set upon this miracle son given to him and Sarah in their old age. He didn’t understand why God was asking him to do this strange act, but he had learned to trust and obey his heavenly Father–even when perplexed.

So Abraham gently awakened young Isaac and two trusted servants, and the small company began the three-day trip to Moriah. As they neared the mountain of sacrifice, Abraham instructed his servants to wait for him and Isaac to return. Then he placed the wood on his son’s back, and together they started up the mountain.  Sensing that something was wrong, Isaac said, “Father, we have what we need to start a fire and the wood: but where is the lamb for a burnt offering?” Abraham replied, “My son, God will provide Himself a lamb for a burnt offering.”

When they reached the top, Abraham tearfully explained the reason for their mission. Willingly Isaac submitted to God’s command. After the last embrace, the father tenderly bound his son and laid him upon the rock altar. Abraham raised the knife, but suddenly, an angel stopped him and directed him to sacrifice a wild ram instead; it was trapped by its horns in a nearby thorn bush. This moving story was not the only time a father had to make a painful decision to sacrifice his beloved son. Could Abraham have failed in his Christian experience as a great patriarch, a known man of God? Could he have done things his “own” way? He could! Many others like him have failed in their Christian experiences by doing things their “own” way.

The animal that was sacrificed in Isaac’s place represented Jesus. In John 1:29, The Bible said John seeth Jesus coming unto him, and he said, “Behold the lamb of God, which taketh away the sins of the world.” Christ died for our sins, for all have sinned since the actions of Adam and Eve until now. We have come short of the glory of God, but Jesus shed his blood for the remission of our sins because God loves us. The strongest earthly tie is a parent’s love for a child; this shows how God loves us. In John 1:12, the Bible says, “Yet to all who received him – Jesus the Christ, to those who believed in his name, he gave the right to become children of God.” Many of us did that by confessing our sins, and he is faithful and justified to forgive us of our sins and cleanse us from all unrighteousness. We all went through the beautiful conversion experience of being baptized and walking in the newness of life.

So the question is: “when and how did some of us fail with this new birth — this newness of life?” Why, after attending church for so long, do some people fail in their Christian experience? We no longer do active work for God; we do not actively witness to others for the sole purpose of winning them to Christ. Some of us do not even study or read the Bible as often as we used to. So what about love? That is a thing of the past. We are critical of our brothers and sisters and much less of strangers. We get angry easily; we are always on edge – fighting here, defending there, planning to be vindictive, to get back at others. You can name the number of things that are shreds of evidence where we have failed in our Christian experiences.

Who are Christians? The Bible said anyone “who received him, to those who believed in his name,” Jesus gave the right to become children of God, “Children born not of natural descent, nor of human decision or a husband’s will, but born of God.” Jesus said, “If you love me, you will obey what I command, and I will ask the Father, and he will give you another Counselor to be with you forever–the Spirit of truth. As Christian, you know him, for he lives with you and will be in you.” As Christians, we should have the Holy Spirit living within us – all the time. What is your will as you get up and get going about your daily duties? It should be God who works in you to will and to act according to his good purposes. Jesus said, “Peace I leave with you; my peace I give you.” As Christians, we should do everything without complaining or arguing so that we may become blameless and pure, children of God without fault in a crooked, dark, and depraved generation, in which we are to shine like stars in the universe. But why do we fail in these Christian experiences? 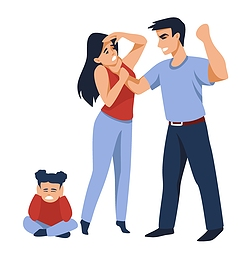 People fail in their Christian experience because they no longer have the Holy Spirit with them; their worldly actions continue as when they were walking with the Lord: going to churches, singing hymns, saying what they know about God, and acting as Christians should, but they do these sinful actions without having the Holy Spirit to guide them. Why? They take for granted God’s grace in their continued evil actions, knowing that God promised that if you confess your sins and repent, he will forgive you. But their manner of confession and repentance lacks what God requires of them, so the Holy Spirit leaves and leaves them to the mercy of the tempter – the Devil and his demons. So they heed to each temptation and sometimes lament their actions, but as their sinful experiences increased, they grew less and less remorseful, and they carefully hid their evil acts, so they failed.

Like Isaiah said in chapter 53:6, “We all, like sheep, have gone astray, each of us has turned to his own way, and the Lord has laid on Jesus the iniquity of us all.” And like Daniel said in his prayer to the Lord: “we have sinned and done wrong. We have been wicked and have rebelled; we have turned away from your commands and laws.” Lord! Our sons and daughters, and we are covered with shame because we have sinned against you.

We must not continue to fail in our Christian experience. We must be like Abraham, who had the Holy Spirit with him throughout his test because he was obedient. Today, we must genuinely repent and turn to God so that our sins may be wiped out, and that the times of refreshing may come from the Lord, and that he may send the Holy Spirit again to live in our hearts. So that when we go through our daily routines, we go with the spirit of God and do His will – not provoking others to wrath or creating an argument. But be temperate and live in peace with all people, especially your brothers and sisters. With your experience, if you love one another, all men and women will know that you are a Christian – Jesus’ disciples, that is, if you love one another.

Very powerful points as to why we fail in our Christian experience. Paul told us in Romans 12:1-2, “to present our bodies a living sacrifice, holy and acceptable to God which is the least that we can do”, after all that He has done for us through Christ Jesus. But then he said right after, “to be not conformed or molded into this world, but to be transformed by the renewing of our mind (adopting the mind of Jesus). The only way that can be done is by loving Jesus, and love in action is obedience to his words or commands, but we need to spend time in prayer asking for the Holy Spirit or comforter to come and help us not only to understand the words of life, but just as important to put then in to practice in our daily lives.
Shalom…